Son Goku is the fictional hero in the series Dragon Ball. All the stories revolve around him. It is the story of collecting Dragon Balls, a lot of fights, thrill, fun, and action. This series of Dragon Ball was made by Akira Toriyama. The first episode of this series started when Son Goku met Bulma, this story was originally published in a Japanese magazine. Bulma joins him in his journey in finding Dragon Balls, through which he can make any wish. Son Goku is a tailed child in the first chapter of Dragon Ball, who is learning martial arts, and strengthen his powers.

The real name of Son Goku is Kakarot, he was born on Earth and later he learned that he belongs to the group of worriers called Saiyans. Due to this, he has so many superhuman powers and strength. His wife’s name was Chi-Chi, who appeared after some episodes, he will have two children named, Gohan and Goten. They will also appear after some episodes.

As Son Goku become elder, he became a worrier who saves his homeland and his planet from those who wants to destroy it. He is very careless and cheerful and on the battlefield, he totally changed and become a serious and thoughtful person.

He concentrates on his Ki (Ki is a special force that is contained inside each living thing in the World of the Dragon Ball. Goku can control his Ki for different abilities, such as enhancement of physical skin power, the formation of pressure fields, defiance of gravity to flight, or unleash it as a blast of disruptive force.). He uses his energy and the most prominent attack he did is, Goku releases blue energy from his palm, this attack is known as Kamehameha.

Son Goku appeared in many stores, movies, and magazines such as; 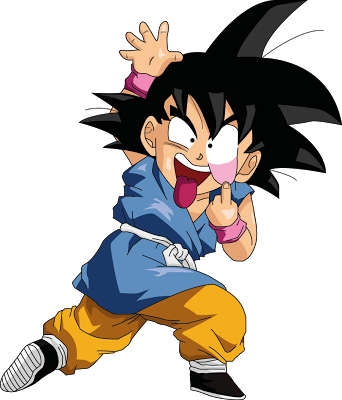 Son Goku is a pride tailed beast and he called Four-tails. It hates human beings because human beings enslaved them. He also thinks that monkeys are more intelligent than human beings.

Son Goku is a giant monkey and red in color. It has a body like a Gorilla. It has yellow eyes with red pupils. There are two horns on his forehead that are moving upward, and it has nine big tails as well. In its mouth, there is no tongue, but mouth opening is like a Volcano.